CARMEL: the Order of the Virgin

To see all images return to the top of this page: La Bruna, the earliest image of the Virgin and Child venerated by the Carmelites, and images for the two Carmelite feasts in honor of the Virgin: O.L. of Mount Carmel, July 16th. and Mother of Divine of Grace, July 23rd.

La Bruna: The Virgin of Tenderness

The first Image of the Virgin venerated by the Carmelite Order. The Virgin of Tenderness, or Eleousa in Greek, is the prototype said to have come from the hand of the Evangelist, St. Luke, who, according to tradition, was also an iconographer. Forced by the Islamic invasion of the Holy Land in the 13th century to leave their beautiful homeland, the Carmelites traveled for safety from Mt. Carmel to Europe, carrying with them the precious icon.
It was enshrined above the high altar of their church in Naples, and there, because of the dark skin tone of the Mother and Child, it came to be known as La Bruna.  It remained in this place of honor for over 100 years, and many miracles took place until the icon was removed to a side altar by a royal decree. In the jubilee year of 1500, pious citizens of Naples carried the icon in procession to Rome. During the pilgrimage, people were again miraculously cured. Skeptical of these miracles, “King Frederic II of Naples conceived a plan to test the power of the Heavenly Mother. He ordered that all the sick and infirm [of the city] assemble before the image with written documentation of their maladies. High Mass was celebrated and special hymns were sung, and when the miraculous picture was unveiled, a ray of light fell upon the face of the Madonna, reflecting its brilliance on the assembled sick. The instantaneous healing of each person was authenticated” Summary and quotation from ~Joan Carroll Cruz Miraculous Images of Our Lady. Rockford: TAN, 1993.
Even though it was not until the 19th century that La Bruna was  Crowned by the decree of the Vatican Council, 11 July 1875,  these joyful 17th and 18th century engravings depict the return of the icon to its place of honor in the Church: 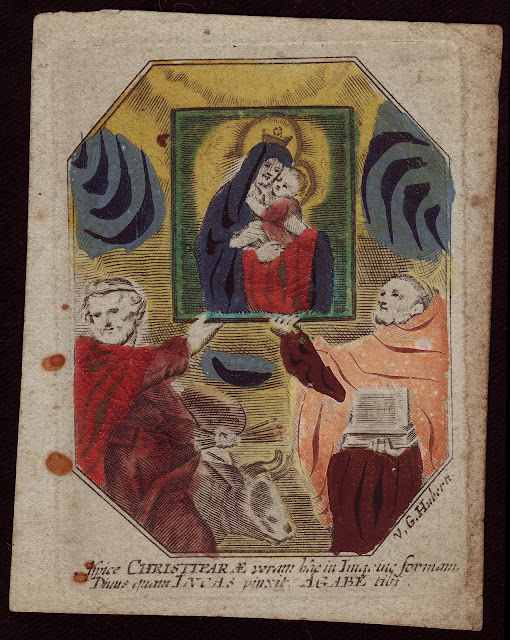 17th century engraving by V.G. Huberti (1619-1684)
the icon is jointly held by the iconographer, St. Luke the Evangelist
and a priest clothed in the Carmelite habit. 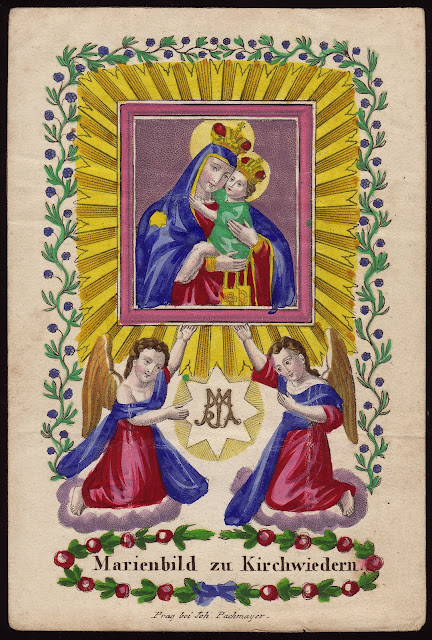 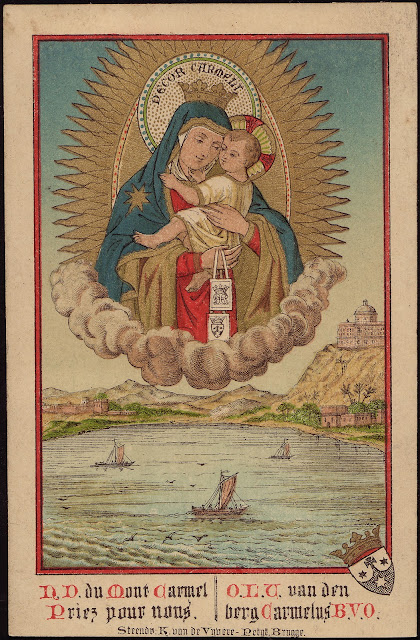 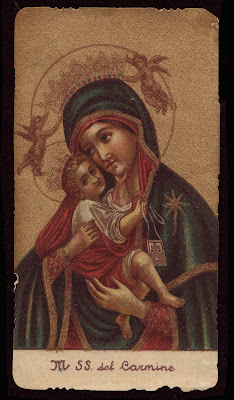 CARMELITE WEDNESDAYS:
A few Carmelites still observe a special day of devotion to "La Bruna" on Wednesday of each week with a liturgy, devotions, and the commitment to show Christian love towards those who are in need.


Illustrated here is a 20th. century Italian holy card with westernized depiction of the ancient icon; note added details of the the Scapular as revealed to St. Simon Stock in the 12th cent. and the 19th century crowning of the icon. How easily the past is rewritten and its true beauty all but forgotten.
Posted by Holy Card Heaven at 8:19 PM 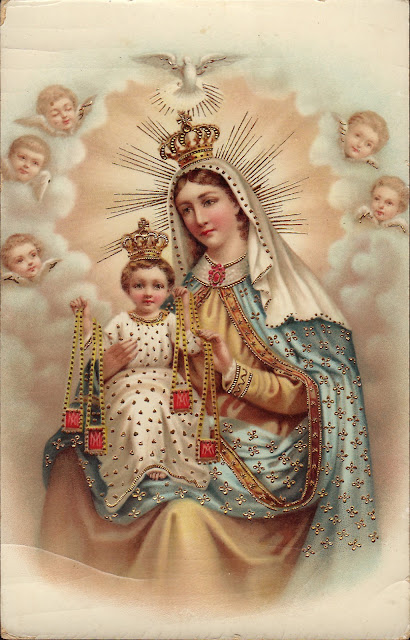 O, FLOWER OF CARMEL,
BLOSSOMING VINE,
SPLENDOR OF HEAVEN,
MOST FRUITFUL VIRGIN
AND GENTLE MOTHER,
HELP YOUR CHILDLREN,
O STAR OF THE SEA.
ROOT OF JESSE, FROM WHICH
THE FLOWER SPRANG,
KEEP US YOUR SERVANTS
WITH YOU FOREVER.
LILY AMONG THORNS,
TEACH PURITY TO OUR SOULS.

The Feast of O.L. of Carmel on July 16 celebrates the revelation of the Brown Scapular to St. Simon Stock. 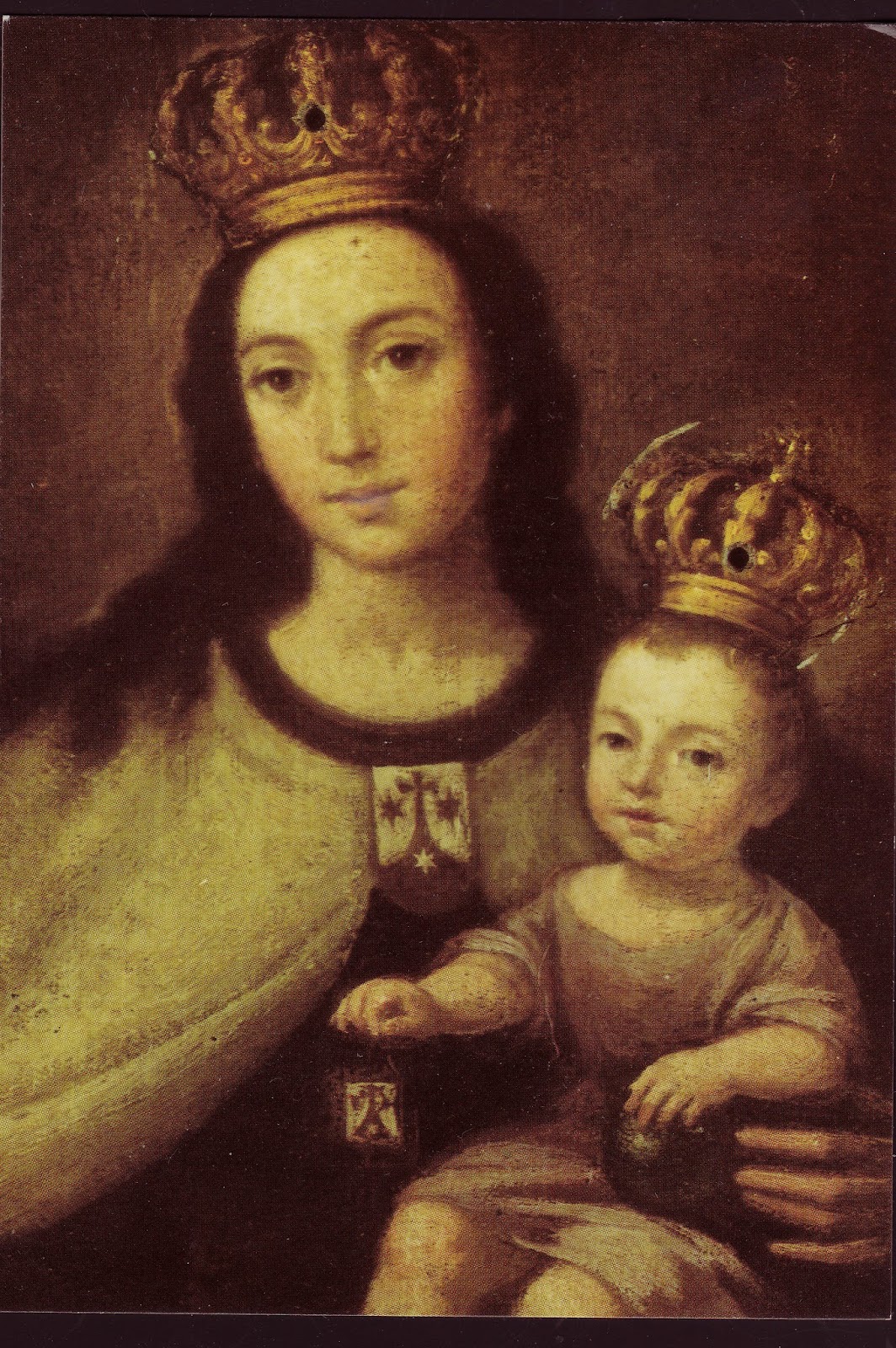 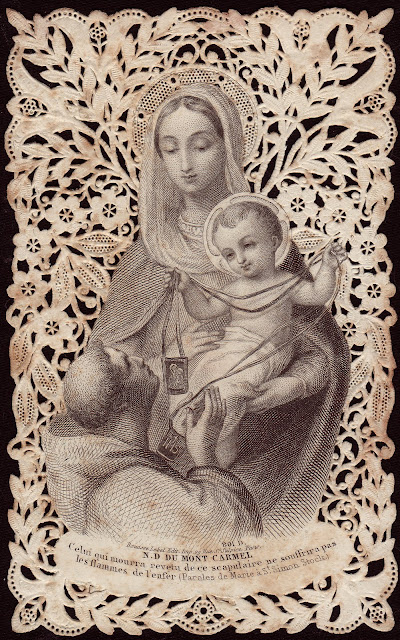 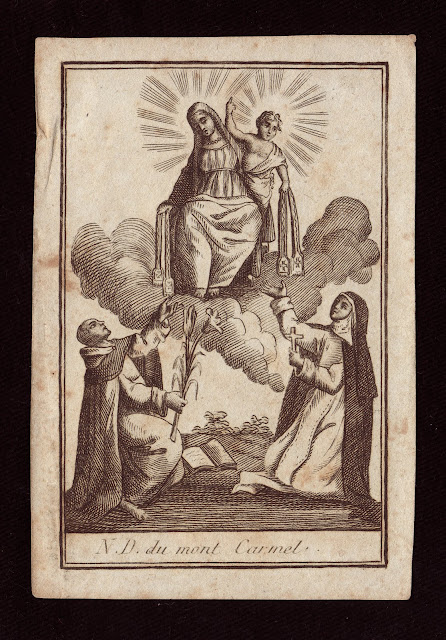 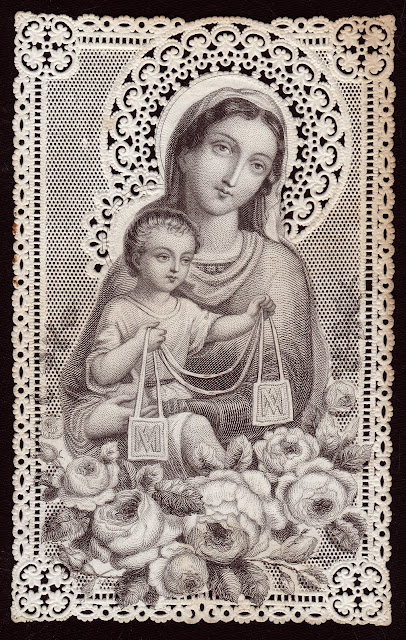 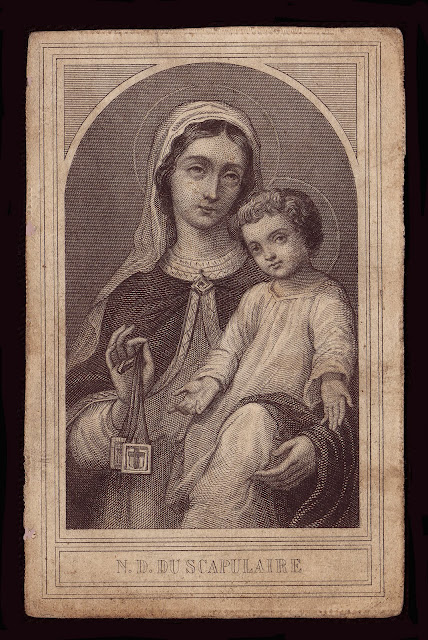 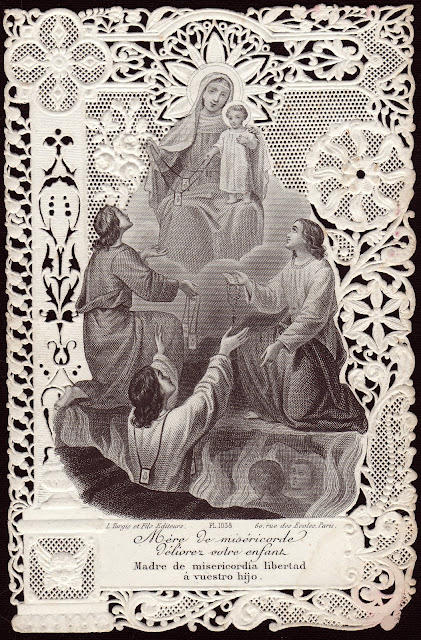 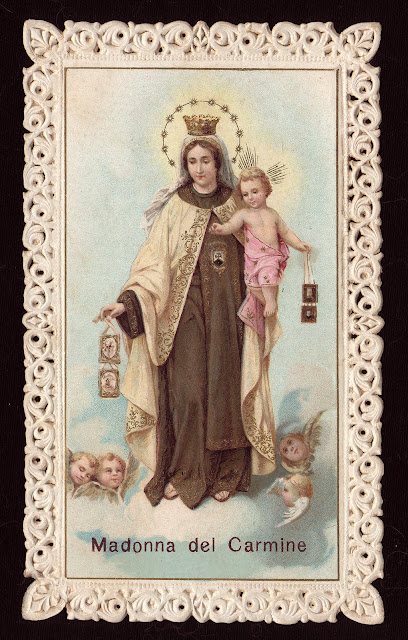 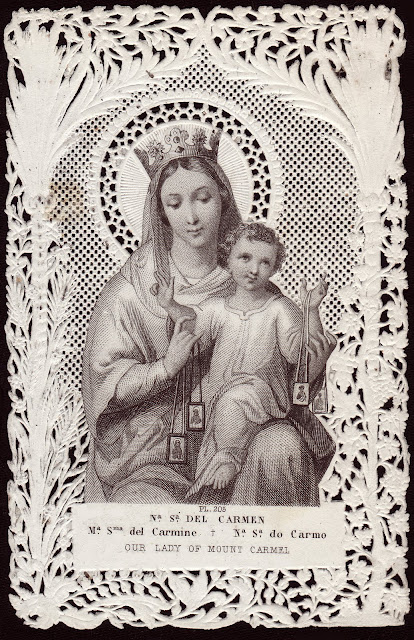 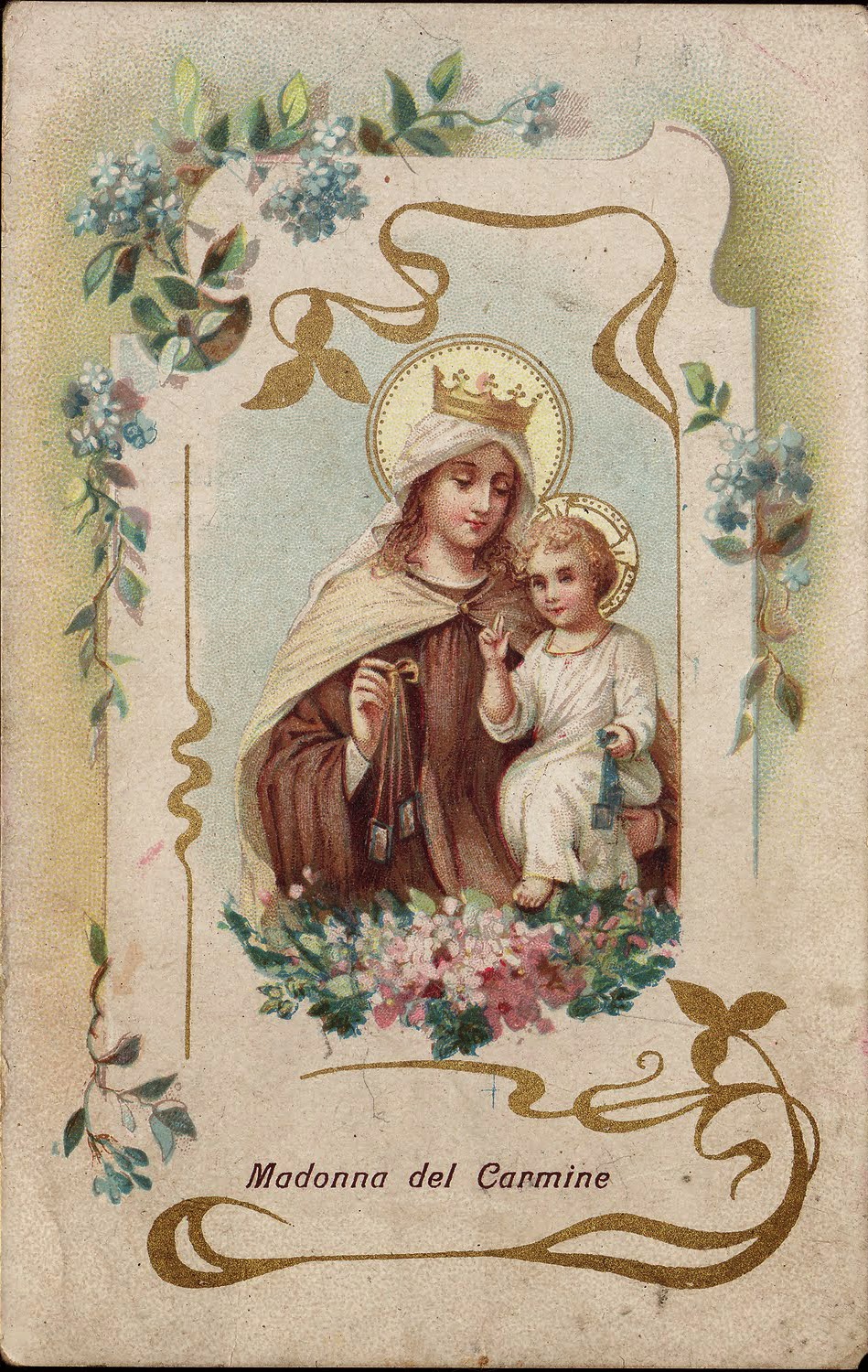 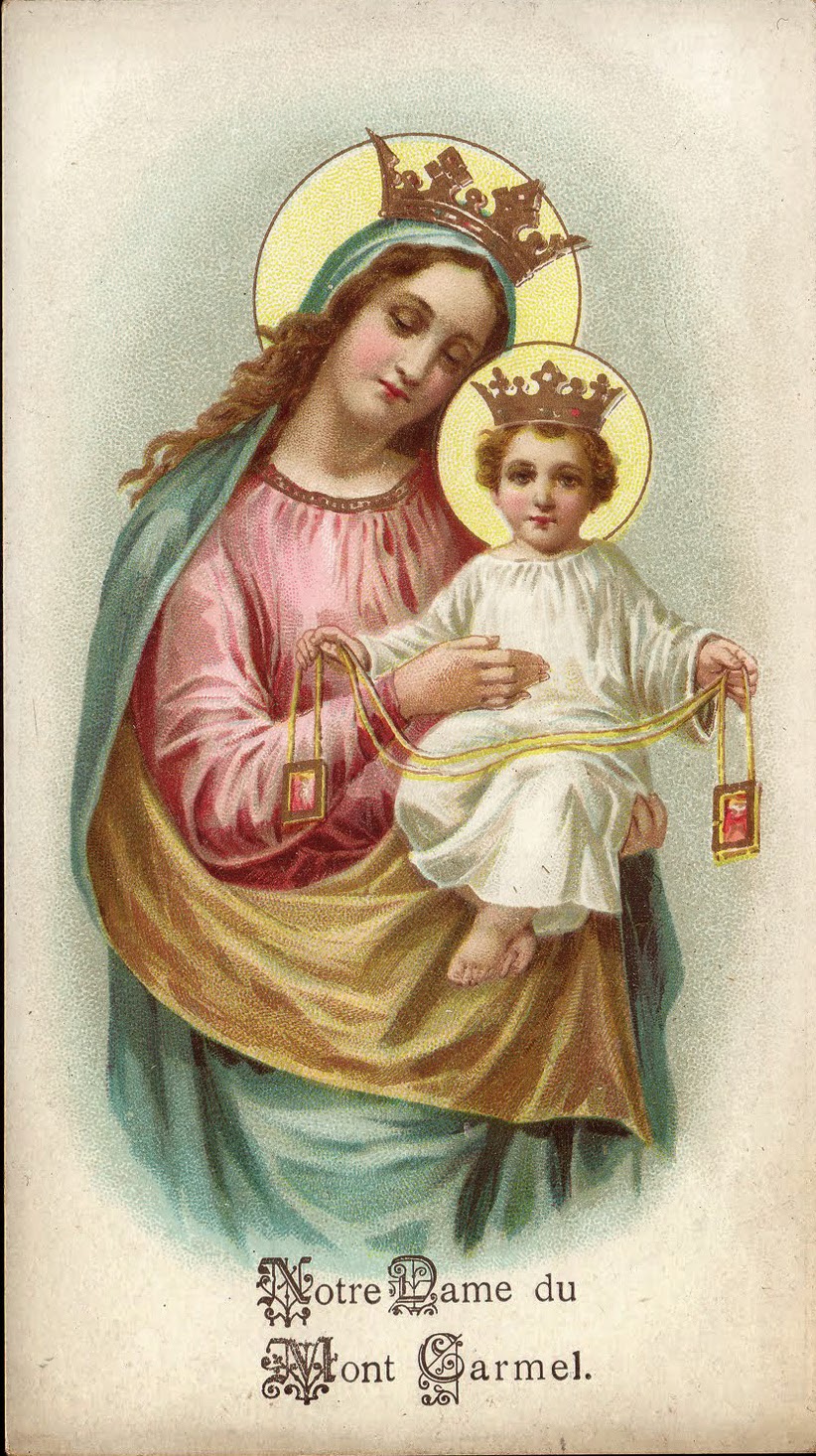 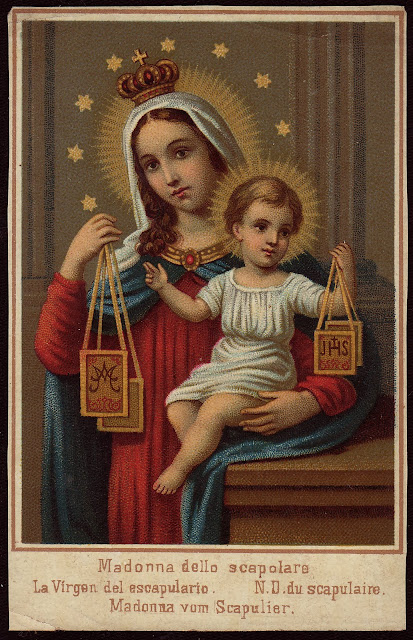 Mother of Divine Grace Vienna, Austria The beautiful image that is venerated on this day has an interesting story and carries a wonderful promise.  The oil painting known as Mater Gratiae and also as Our Lady of the Bowed Head was  rescued from a pile of abandoned ruins and lovingly restored in 1610 by Ven. Dominic of Jesus and Mary, of the Order of Discalced Carmelites. According to his testimony, our Lady spoke to him and promised, "'All those who implore my protection, devoutly honoring this picture, will obtain their petitions, and will receive many graces. Moreover, I shall hearken in a special manner to the prayers that shall be addressed to me for the relief of the souls in purgatory'"  ~Joan Carroll Cruz Miraculous Images of Our Lady. Rockford: TAN, 1993. 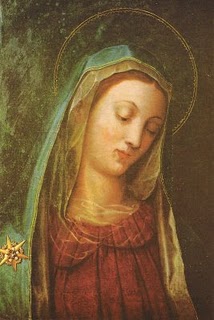 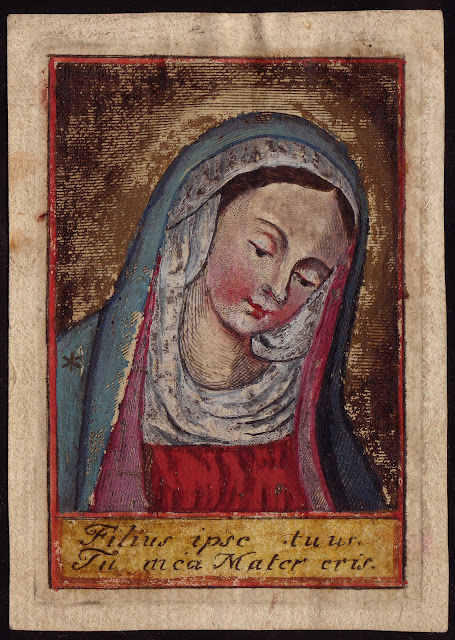 His own son, your mother I will be.
Our Lady of Grace
Venerated in the church of Berzee, Belgium
17th, cent, engraving hand colored 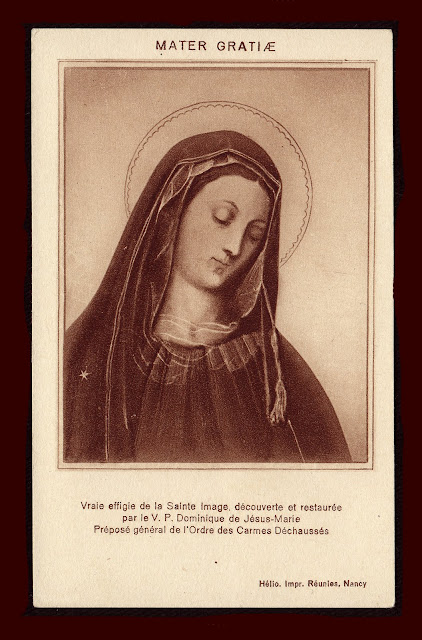 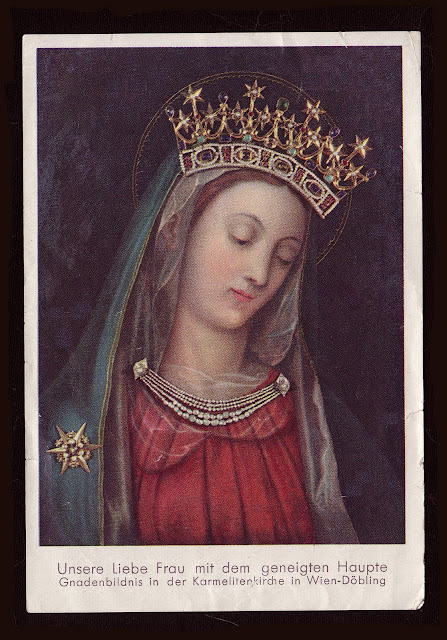 Links:
Our Lady, Mother of Divine Grace OCD Memorial
Posted by Holy Card Heaven at 12:10 AM